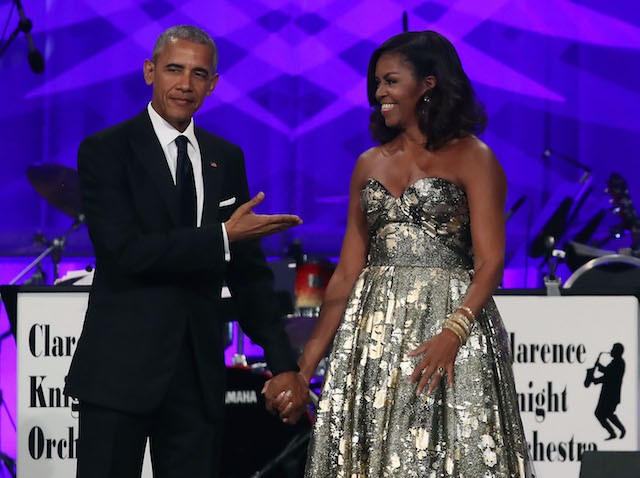 Barack And Michelle Obama Congratulated Students For Their ‘Long Journey’

The Obamas appeared together in a video from their home, celebrating a “huge day for all of you,” as the former first lady put it.

The Obamas congratulated students on not just completing their academic journey, but doing so while figuring out how to support their teachers, friends and family through unprecedented circumstances. And above all, they advised graduates to make sure to properly celebrate their accomplishments, and to thank their parents for helping them succeed.

“Today is the culmination of a long journey,” Barack said. “Just as you were rounding the final turn, the world threw a pandemic your way. … That’s a lot to ask of anybody, but despite all that, here you are.”

Michelle Obama joined the livestream again later to address protests in the U.S., calling attention to the country’s long history of racism and calling on graduates to encourage their peers to vote and learn more about their local elections.

“What’s happening right now is the direct result of decades of unaddressed prejudice and inequality,” she said. “For too many people in this country, no matter how hard they work, there are structural barriers for them that just make the road longer and rockier. … If you can’t even approach the police without fearing for your life, well, then how do you even begin to chart your own course?”

She added later: “Not only can you do better than those who came before you, but you will.”

President Barack Obama said in a commencement speech Sunday that the nationwide protests following the recent deaths of unarmed black women and men including George Floyd were fueled from “decades worth of anguish, frustration, over unequal treatment and a failure to perform police practices.”

Obama along with his wife, Michelle, delivered speeches during YouTube’s “Dear Class of 2020” virtual ceremony. The duo, along with a wide-ranging, star-studded lineup including Beyoncé, Lady Gaga and Tom Brady, offered inspirational messages in hopes of uplifting new graduates.

“Look what you’ve been able to do in the last 14 days,” she said. “We’ve seen the power of the collective. We’ve seen what happens when we join for the same cause. Please, continue to be the voice for the voiceless.”

Nipsey Hussle & JAY-Z's new collaboration "What It Feels Like"
Vanessa Bryant On 'Finding the Light In Darkness': 'Kobe and Gigi Motivate Me To Keep Going'
Ciara Announces The Birth Of Son Win Harrison Wilson & Shares The First Video Of Him