Alex Rodriguez’s Fight To Save His Relationship With Jennifer Lopez: He ‘Has Made Many Promises’

Alex Rodriguez and Jennifer Lopez’s four-year relationship, E! reported over the weekend, was on its last legs amid breakup reports and later a statement from the two saying they’re still together but “working through some things.”

Things were bad then: “Alex is fully aware that this relationship is currently hanging by a thread,” a source told the outlet. Now, Rodriguez has flown to the Dominican Republic, where Lopez is filming her new movie Shotgun Wedding, to fight for their relationship in person.

E! and TMZ got details about his effort and everything A-Rod is doing to try to convince J.Lo their relationship can be salvaged. Page Six, meanwhile, got a better picture of what things were like last week: that up until Friday with its breakup reports, Lopez was still hopeful their wedding could go on despite their relationship’s problems.

“There were issues between them, but she was still sitting for fittings for [her wedding] dress last week,” a source told Page Six.

Now, Rodriguez is trying to prove to Lopez their relationship can be saved. “They are trying to figure things out,” E!’s source said. “He absolutely does not want to split up and has made many promises to try and keep her.”

“He flew out to be with her and to prove to her how serious he is,” the source continued. “They don’t know what’s going to happen. Untangling their lives, business dealings and families would be devastating to everyone involved.”

TMZ was told that part of the reason they’re trying to work through things is because their four children (Lopez’s 13-year-old twins Emme and Max and Rodriguez’s two daughters, 16-year-old Natasha and 12-year-old Ella, from previous marriages) had become very close and were shocked by the breakup.

“Neither of them expected news to break on Friday about their split,” TMZ wrote, “and as a result, they didn’t have time to prepare their four children.” The outlet noted that while kids were a heavy factor in their Friday night discussions, their blended family was not the only reason that Lopez and Rodriguez ultimately released a statement saying they hadn’t split.

Rodriguez and Lopez have not addressed reports about their relationship discussions directly on their social media. But yesterday, Rodriguez posted an Instagram Story of himself in the Dominican Republic, captioning it, “Happy Monday. New week. New day. Onward. Upward”—a seemingly subtle message about the state of the J.Lo-A-Rod union now. 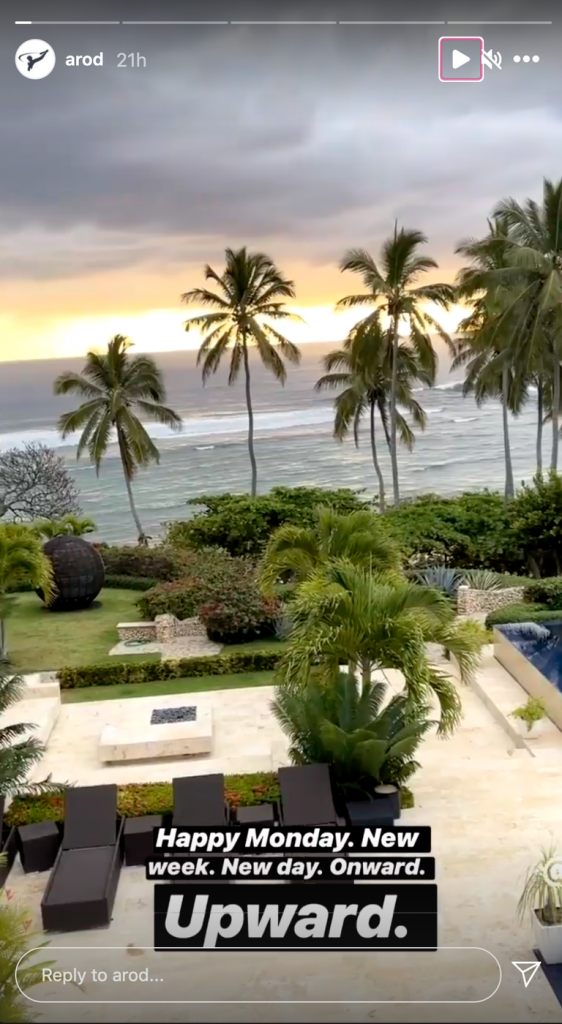