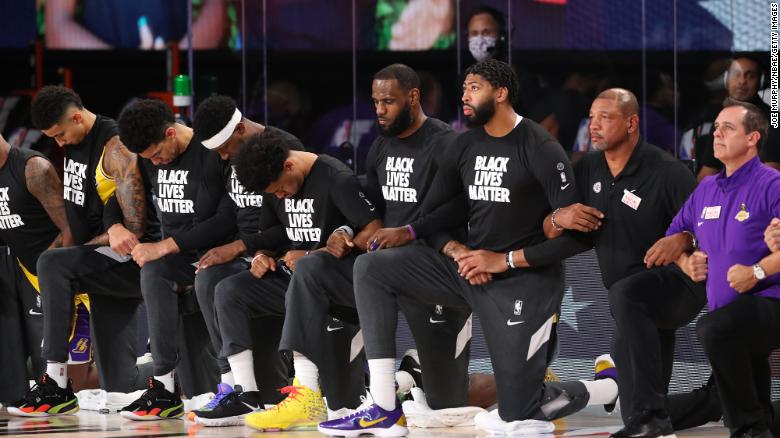 Every NBA player who restarted the NBA’s season on Thursday kneeled during the National Anthem, wearing “Black Lives Matter” shirts.

Moments before tipoff on Thursday evening, players with the New Orleans Pelicans and the Utah Jazz, joined by coaches and game officials, all took a knee.
The Los Angeles Lakers and Los Angeles Clippers followed suit ahead of their game in Orlando.
On some game jerseys, players’ names were replaced with messages, such as “Equality,” “I am a man,” “Ally,” and “Say her name,” sending a clear message in support of the social justice movement. 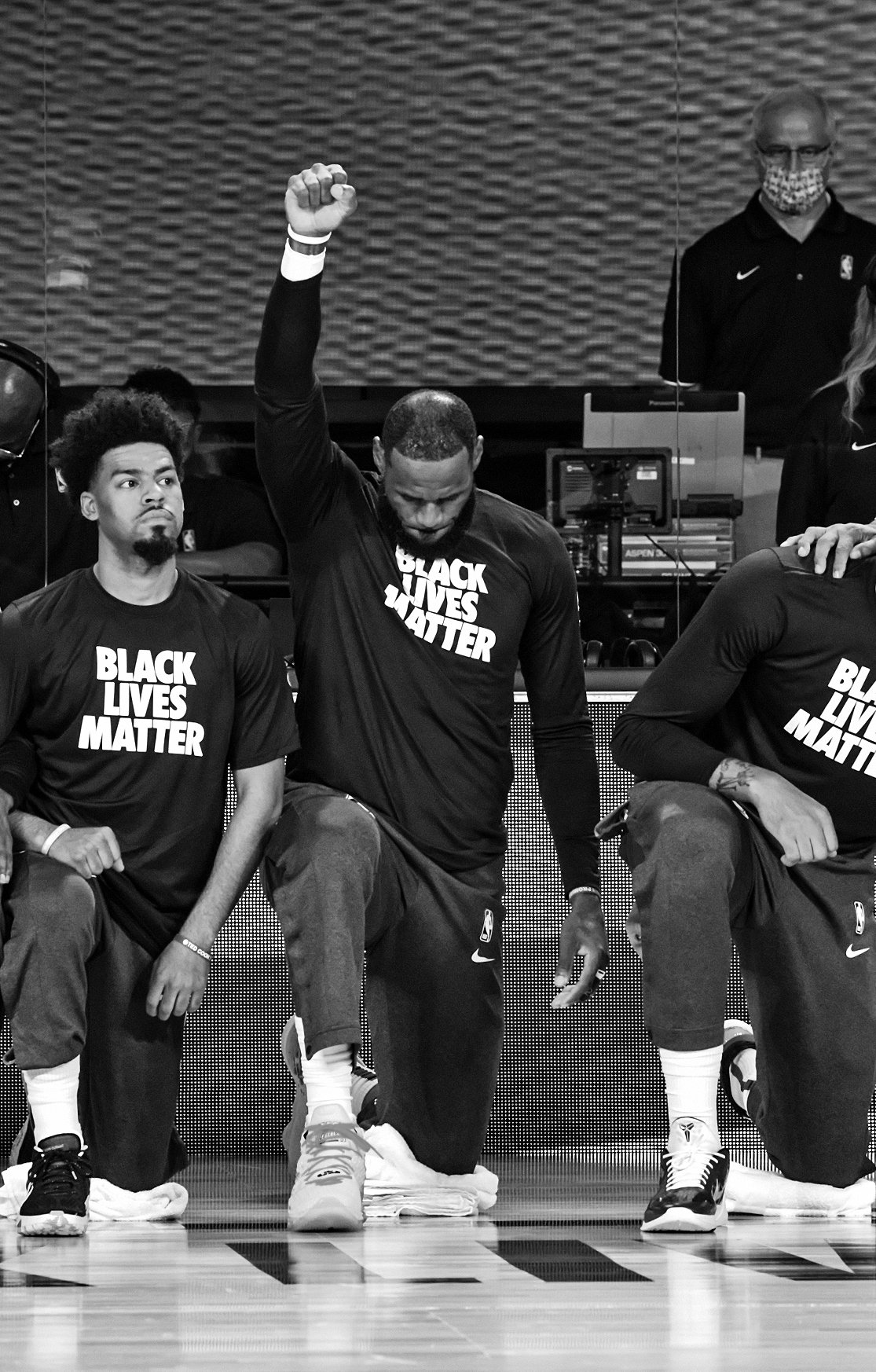 Los Angeles Lakers players kneeled during the national anthem before the game against the LA Clippers.
“I respect our teams’ unified act of peaceful protest for social justice and under these unique circumstances will not enforce our long-standing rule requiring standing during the playing of our national anthem.”
The New Orleans Pelicans, in a statement, said the team stands by the “ideals of freedom of speech and the right to peacefully protest.”
“Collectively with the Utah Jazz, our organization joins the NBA in supporting our players and coaches. To promote meaningful change relative to social justice and racial equality, the New Orleans Pelicans have partnered with our players, staff and coaches to create a Social Justice Leadership Alliance committed to furthering the discussion, listening and learning and taking action to make positive change in our community and our country,” it said.
Coaches, referees, and members of the New Orleans Pelicans and Utah Jazz kneel together.
The Jazz stated the team is “committed to advancing social justice and stand in support of the players, coaches and staff as they exercise their First Amendment rights, and use their voices, their experiences, and their platforms to peacefully express themselves.”

The NBA isn’t the first league to restart their season with players kneeling in support of the movement.
The WNBA, when the league began its season last week, dedicated the season to Breonna Taylor and the Say Her Name campaign. Outside of basketball, many MLB players also took a knee as their season resumed earlier this month.
All of these demonstrations come amid unrest in the US over the deaths of Ahmaud Arbery, Breonna Taylor and George Floyd, and mirror that of Colin Kaepernick during the 2016-17 NFL season.
The deaths have caused ongoing protests throughout the country, and resulted in calls for racial equality, social justice and police reform in the US, among other demands.

The NBA returned after a 20-week hiatus to a so-called bubble, in Orlando, Florida.
Amid the pandemic, the league took precautions Thursday to protect against coronavirus. The scorer’s table was surrounded by plexiglass, for example.
Team benches also consisted of multiple rows of seats — with appropriate distance between each seat — and were divided into three sections: players; coaches and team staff.
During any timeout or period break, players and coaches could still huddle like normal, but they had to sit in or congregate around movable chairs apart from the team benches. The chairs used during timeouts or period breaks were cleaned and disinfected after each use.
The Los Angeles Lakers and the Los Angeles Clippers took their game down to the wire on Thursday — just like the Utah Jazz and New Orleans Pelicans did earlier in the night.
LeBron James was clutch at the end. First, he scored what turned out to be the game-winning shot by getting the offensive rebound on his own missed shot and laying it in. On the other end of the floor, he defended the Clippers two stars, Kawhi Leonard and then Paul George, to deny the Clippers from scoring. The Lakers would win, 103-101.
The league shut down on March 11 when — just moments before the Utah Jazz were to take on the Thunder in Oklahoma City — it was learned that Jazz center Rudy Gobert had tested positive for Covid-19.
On Thursday night, when play resumed, it was fitting that Gobert scored the first basket in a layup and hit what would be the game-winning free throws, in Utah’s 106-104 win against the Pelicans.
“Life works in mysterious ways,” Gobert said. “I’m just happy, blessed to be able to be back on the court, to do what I love to do, to be back out there with my teammates and try to win a game.”
Article By : CNN 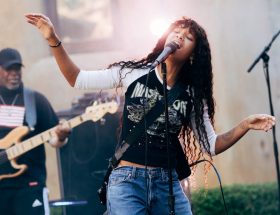 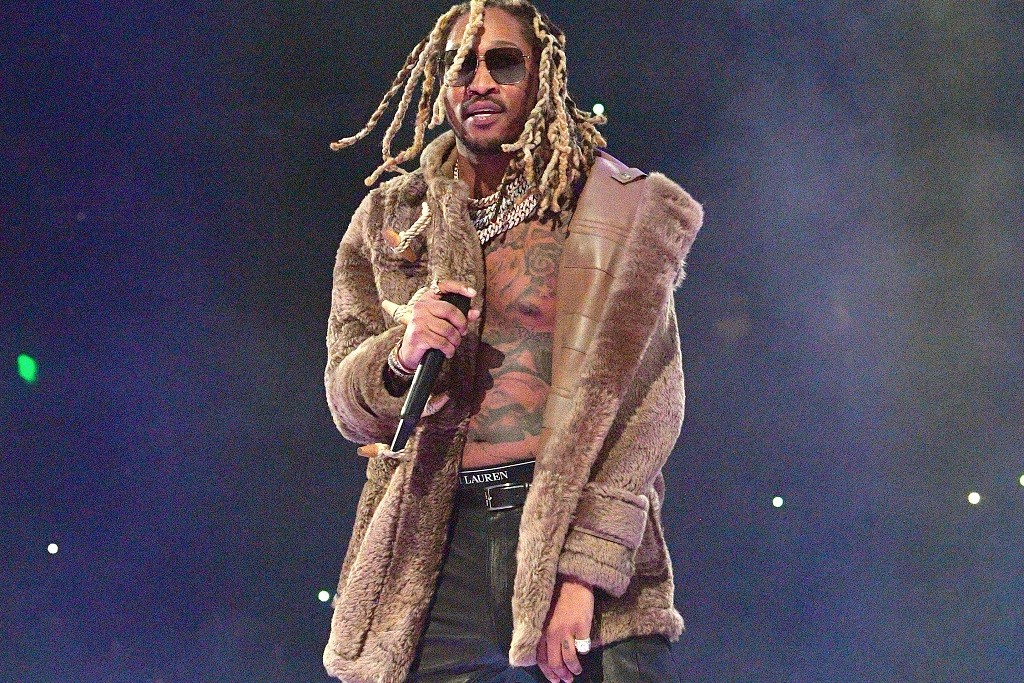