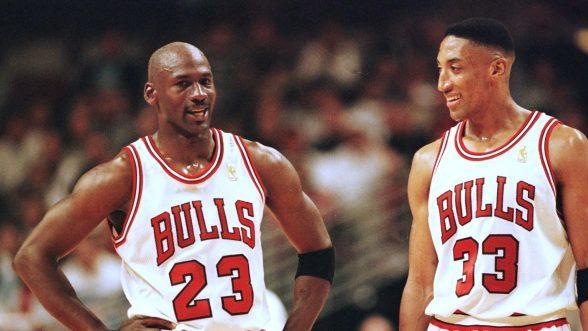 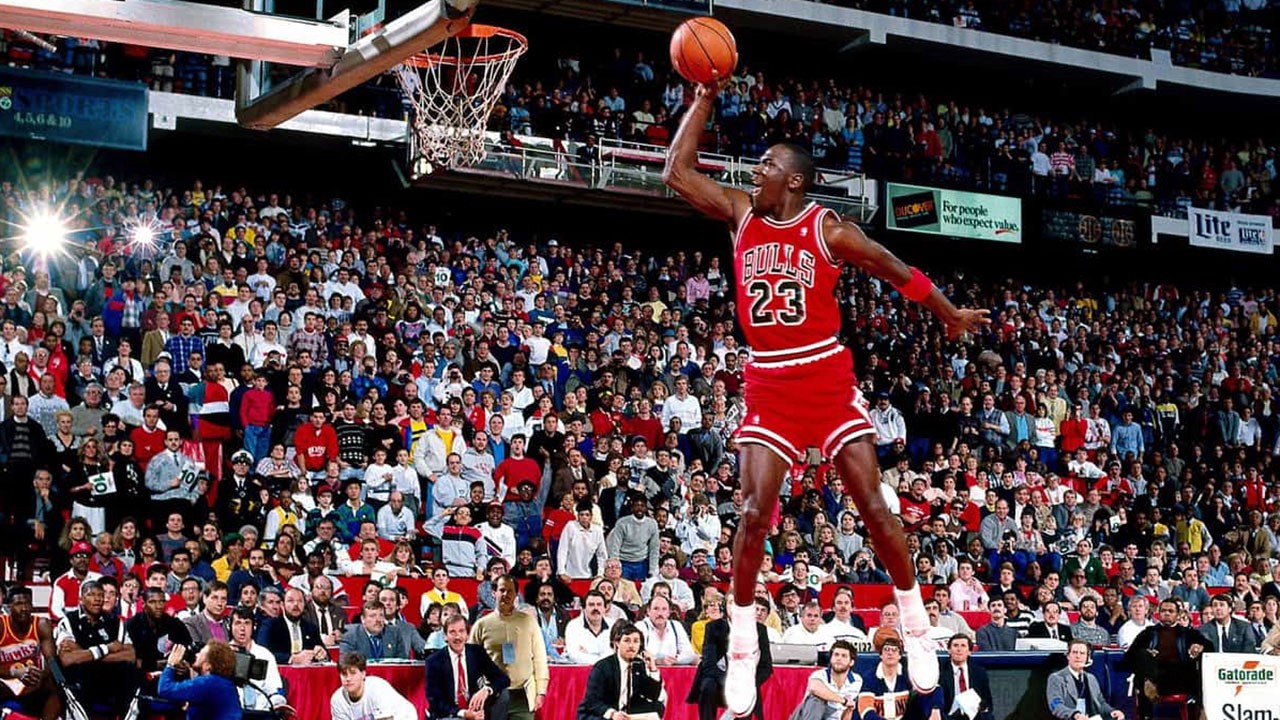 Here were the key moments from the first night of ESPN’s 1997-98 Bulls doc:

The first two episodes establish how Jerry Krause,  who was  the Bulls’ general manager at that time , established  the blueprint  for the team’s breakup. Phil Jackson says in the documentary that after agreeing to come back for the 1997-98 season, Krause told him it was his last year regardless of how many games he won.

“[Krause] called me into his office and said, ‘This is gonna be your last year, I don’t care if you win 82 games in a row, this is going to be your last year here.’ So I said, ‘fine,’ and walked out of the room,” Jackson said.

Michael’s  Competitive Nature  In Part Started With His Brother

“Every time I step on that basketball court my focus is to win the game. It drives me insane when I can’t,” Jordan said. “As you get older you look back and you understand how you became who you are. I don’t think I’d be here without the lessons I learned at a very young age. That competitiveness within me, started as a kid.”

From here the documentary flashes back to Jordan’s childhood in Wilmington, North Carolina, where Michael notes there were two primary forces driving him to greatness. The first was the racism he faced as a kid and wanting to get out of Wilmington.

“At the time you had racism all over North Carolina — all over the United States — and it was a lot of it around there,” Jordan said. “So, as a kid, it was like, this is where I don’t want to be. I want to excel outside of this. So my motivation was to be something outside of Wilmington. For me, it became athletics.”

The second factor, and what drove his competitive fire, was his older brother, Larry, who was initially a better basketball player than him. Larry says in the documentary that he was the worst of the Jordans when it came to being overly competitive. “My brothers hated losing, but not on the same level like me, because if you beat me back then, we had to fight, and that’s just the way I was.”

Larry was also the favorite of their father, James, and Michael explains that was “traumatic” and made him want to be so good he would garner the same amount of attention from his dad.

“I don’t think, from a competitive standpoint, I would be here without the confrontations with my brother,” Michael said. “When you come to blows with someone you absolutely love, that’s igniting every fire within you. And I always felt like I was fighting Larry for my father’s attention. … When you’re going through it, it’s traumatic, because I want that. I want that approval, I want that type of confidence. So my determination got even greater to be as good if not better than my brother.”

This section of the documentary, speaking on his relationship with is brother and father, is as vulnerable as you’ll ever see Michael Jordan. You can see the emotion in his face as he talks about desperately wanting his father’s approval, and it explains so much of his win at all costs attitude that became the defining characteristic of him, not only as a basketball player, but as a man. It also shows that this part of Michael wasn’t born of something great, but out of pain.

One of the  cutest  revelation of the episode  happened when Deloris Jordan, MJ’s mom, reads aloud a letter that he wrote to her as a freshman at UNC. The older Michael couldn’t help but laugh at his younger self’s pleas for money and stamps:

“I am sending you my account number so that you can deposit some money in my account, I have only $20 left,” Deloris reads aloud. “Tell everyone I said hello and smiled. God and I love you, Love Michael.

“P.S. Sorry about the phone bill. Please also send me some stamps.”

The documentary also showed how Jordan, having arrived at Chapel Hill as a slender guard for one of the nation’s top programs, felt determined to show he more than belonged. Roy Williams, an assistant at UNC at the time, relayed a conversation in which Jordan told him he wanted to be the best to ever play at the school.

Williams: “Well you gotta work harder than you did in high school.”

Jordan: “I worked just as hard as everybody else.”

Williams: “Oh, excuse me, I thought you just told me you wanted to be the best player that ever played here.”

Jordan: “I will show you. Nobody will ever work as hard as I work.”

James Worthy, then the Tar Heels’ star player, said he was better than Jordan … for about two weeks.

As a rookie, Jordan wasn’t into the party scene

During the eighties Drugs were a part of  the sports  scene, cocaine especially because of the crack era.

Before Jordan joined the Bulls in 1984, many Bulls players had a reputation for partying and it was widely assumed many were recreational drug users.  Michael Jordan was never a partier , he never did drugs

One of the most surprising  scenes from his rookie season happened during an evening in Peoria, Illinois, during the preseason when Jordan got his first look at what a professional athlete’s life could be. Looking for his teammates at the Bulls hotel, he walked in on a bunch of his teammates hanging in a room filled with lines of coke, weed, and women.

“First thing I said, ‘I’m out,'” Jordan remembers. The 21-year old rook from North Carolina was afraid if the room got raided by police he would be considered guilty even if he wanted nothing to do with the drugs. Jordan was more into playing cards or watching movies during his early NBA days. He mostly kept to himself.

Scottie Pippen missed the first two months of the 1997-98 season after undergoing foot surgery. In “The Last Dance,” Pippen says that growing frustration over his contract caused him to intentionally delay surgery until the fall, when rehab would occur during the season instead of interrupting his summer.

“I decided to have surgery late because I was like, ‘Y’know what, I’m not gonna f–k my summer up,’” Pippen says.

Phil Jackson says in the documentary that he was okay with Pippen’s actions, but Jordan criticizes his former teammate: “Scottie was wrong in that scenario. He could’ve got his surgery done as soon as the season was over and be ready for the season. What Scottie was trying to do was trying to force management to change his contract. And Jerry [Reinsdorf] was never gonna do that.”

Jordan could’ve ended his career in 1986

That spring will mostly be remembered for Jordan scoring 63 against the Celtics in the playoffs, but if it was up to the Bulls’ front office, he may never have played. Part of Episode 2 looks at the handling of Jordan’s foot injury during the 1985-86 season, which he returned from despite doctors saying there was a 10% chance he’d suffer a career-ending injury by playing on it.

“I said to Michael, ‘You’re not understanding the risk-reward ratio. If you had a terrible headache and I gave you a bottle of pills, and nine of the pills would cure you and one of them would kill you, would you take a pill?’” Bulls owner Jerry Reinsdorf says in the documentary.

Jordan’s response? “Depends on how f–king bad the headache is.”

The situation would prove to be a turning point between Jordan and the franchise.

With Pippen growing increasingly discontent with being severely underpaid and named in trade rumors, the forward began taking out his anger. In addition to delaying surgery to the fall and demanding a trade in November, his relationship with Krause became openly acrimonious. “Couldn’t tolerate him anymore, couldn’t respect him,” Pippen says in Episode 2.

Backup center Bill Wennington added that while barbs had long been thrown back and forth, Pippen “crossed a line” and made it personal.

There’s a reason why the documentary makers chose their name. On the first day the 1997-98 Bulls met, spurred by that last conversation with Krause, Jackson handed out laminated notebooks that read on the cover: I II III IV V VI THE LAST “DANCE”?

Jackson’s message to his players at that meeting was clear, as described by Wennington: “Enjoy what’s happening, because this is it.”